The Lord of the Rings trilogy by J R R Tolkien and Silence by Shusaku Endo have something in common. They are fiction books I have read at least twice. As much as I like to read, to read something more than once indicates serious engagement.

I read the Tolkien fantasy for the first time in the late 60s. I was in my late teens or early twenties. As I finished the last page of the final book, something was playing on my radio. I have no idea what it might have been, but for at least the next 20 years after that day, whenever I would hear a certain chord progression in a song, I was immediately transported back to Middle Earth. What was it about that book that so insinuated it into my psyche? Perhaps it was the heroism of the little faithful hobbits, who, against all odds brought down the seemingly all-powerful evil that threatened to conquer all that lay before it.

Silence is the other work of fiction that I have read more than once. 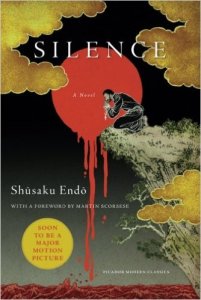 I first read it perhaps 10 years ago. I read it again just recently in anticipation of seeing the film adaptation by Martin Scorsese. Having been a missionary in Asia for 20 years, the book reminded me of the struggles many Christians–both foreign and national–have endured in order to bear witness to Jesus Christ. The heroism of the book is mixed. And there are many other issues worthy of deep meditation. It is a powerful and disturbing book.

I would love to hear from others about fiction books you just had to read more than once.

2 thoughts on “Worth Reading Again”

This is a text widget, which allows you to add text or HTML to your sidebar. You can use them to display text, links, images, HTML, or a combination of these. Edit them in the Widget section of the Customizer.
Loading Comments...
%d bloggers like this: